More appearances and performances for Phatal Records featuring Blastphumis and Dior will be occurring throughout the DMV - stay tuned for where and when!

For information on booking or performance dates, email phatalpr@gmail.com. To hear more tracks from the SMOKE EP including Blastphumis' remix of Lady Gaga's "Poker Face" visit www.myspace.com/blastphumis82
Posted by Phatal Headquaters at 8:02 PM No comments:

Dior Ashley Brown Wraps Up Filming of "End of Occupation" 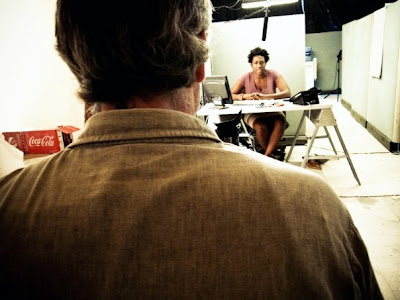 For three unsuspecting telemarketers who are about to lose their jobs, their last day of employment is spent making you laugh. This dark comedy is a series of short films about lives interrupted by a call from a telemarketer. 21 short stories are connected through the telephone lines and back to one of the telemarketers played by Ryan McMullin, Regina Lee, and Dior Ashley Brown. Each call they make interrupts a different story already in progress; from kidnappers to a man on death row, and from lovers to killers. The calls change the environment just enough to makes us laugh at ourselves.

In the film, Dior's character is "light-hearted, free-spirited and isn't afraid to take risks," she explains. In working with director Michael McMullin, Dior's character took on the many different facets of a black woman. "I wasn't pigeon-holed," she says. "I was agressive, passionate, funny and alluring." The entire experience of working on "End of Occupation" taught Dior to take chances and maintain versatility. "This role really pulled me out of myself."