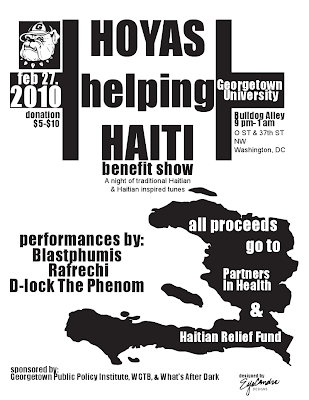 When Blastphumis and Dior hit the stage you can expect to hear bits of Haitian history and culture told through Haitian poetry followed by Phatal Records' original tracks emulating the "love, pain, and life" of Haiti. Performing alongside the Phatal duo will be special guest, GYPC of Likeblood Entertainment.

All proceeds go to Partners In Health. Donation of $5-10 is suggested. Support the cause: RSVP and share with your friends at Hoyas Helping Haiti's Facebook page!!!
Posted by Phatal Headquaters at 6:36 PM No comments: